If you are packing in a polyethylene film bag, you may have encountered the following stack stability issues:

Why is it that, in the field of packaging with film bags, the stacks of certain products are always deformed despite a plenty of pallet wrapping film and even straps, thus the “paunchy” stacks rub against each other during transport, even causing the bags to rub out and tear?

If the packaged product is of the kind that is able to get rearranged, displaced or compacted in the bag (e.g. fine dusty products, slippery pellets, quartz sand, seeds, salt, minerals, wood pellets etc.), then the original “brick” shape of each package on the pallet will change, their originally horizontal top and bottom planes are distorted, and over time the whole stack becomes more and more rounded, thus the pallet covering film or strapping also loosens, and eventually the bags slip on top of each other.

In addition, bags slip even more easily if they are dusty or wet, or if the bag wall is stretchy (e.g. in summer heat). Stable stacking of frosty/ icy packages of frozen foods is an extreme challenge.

In all such cases, the integrity of the stack can be guaranteed with special, non-slip film bags. 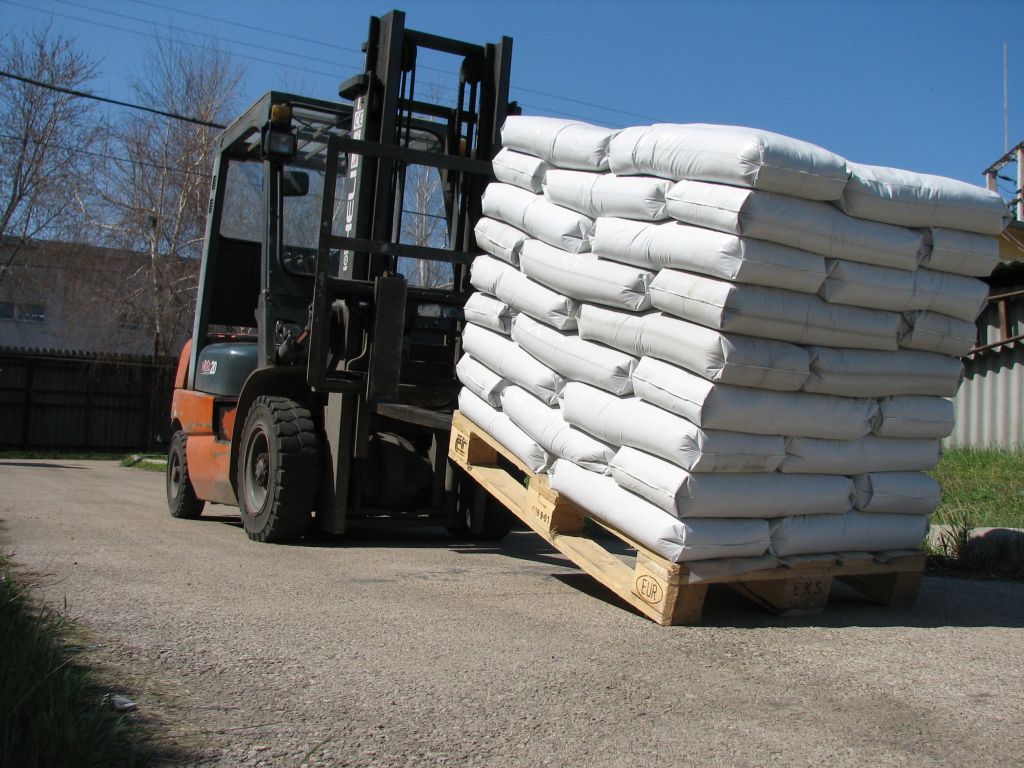 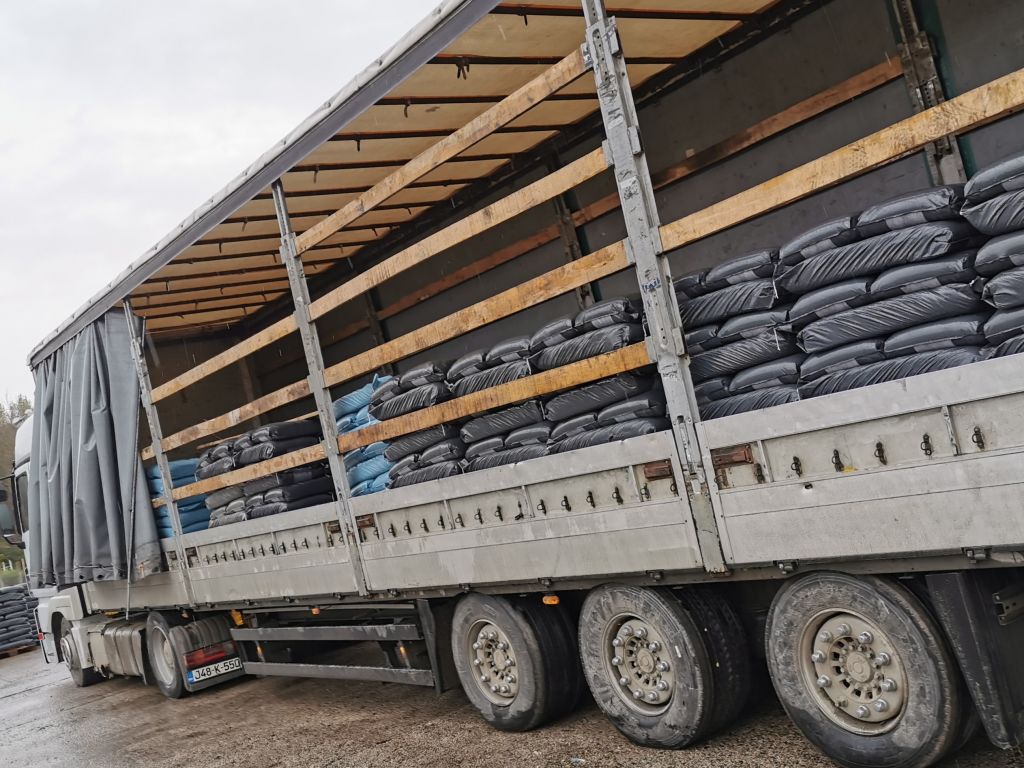 Other approaches on the market to stabilise the stack:

Why is it that a seemingly stable stack of traditional plastic bag packages starts to deform during transport, the bags slipping more and more in it, in spite of the many layers of stretch film? The cause is, ultimately, a temporary loss of static friction.

We know from physics that superimposed packages can only hold each other laterally (with static frictional forces) when they are well compressed vertically. This pressing is provided, constantly and automatically, by the weight of the packages but only as long as they are left motionless. Industrial transport is a shaky thing, during which, unfortunately, two things happen on the pallet at the same time: on the one hand, horizontal impulses (braking, acceleration, cornering, swinging, etc.) try to pull each inert package horizontally, and on the other hand, simultaneously, each drop, of the stack, from the peaks of vertical vibration greatly, and many times, reduces the vertical compression, and therewith also the horizontal adhesion, between the packages. 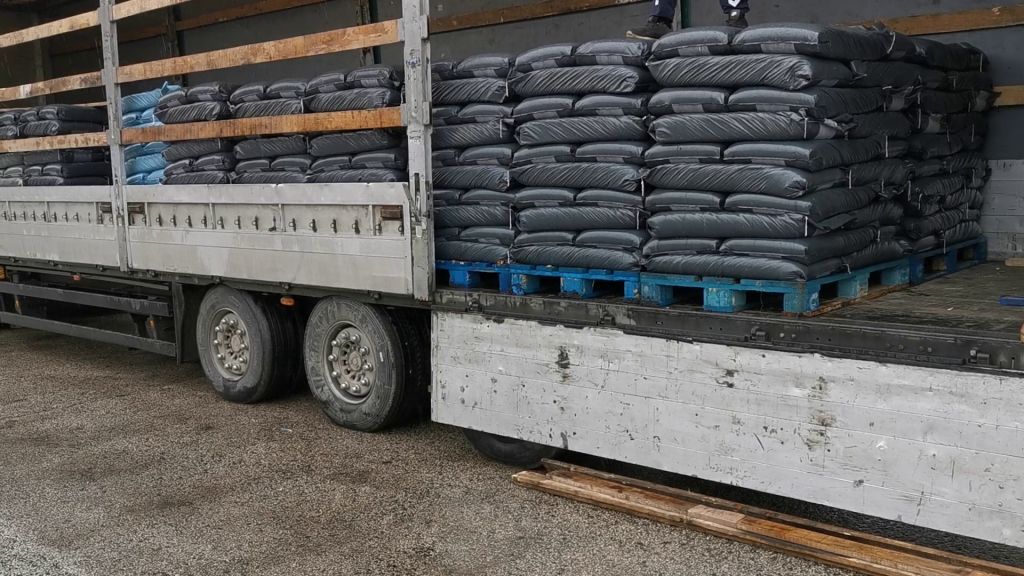 Many of these small events, when added together, can even lead to the collapse of the stack. The solution: use non-slip plastic bags.

The high coefficient of friction of the GripTop bag provides a "spare grip" that is strong enough, even at moments of reduced compressing force, to prevent packages, trying to slip sideward, from slipping on top of each other.

The Abrafol bag offers even more. In the free-fall phases of the strongest vertical vibration, when the compressive force between the packages is specifically zero, the Abrafol packages will consistently not slip on each other. At these critical moments, the coefficient of friction of Abrafol bags is quasi-infinite. That is why there is no need for a stack cover around the Abrafol stacks.

A special feature of fine dusty products (e.g. cement, tile adhesive, etc.) is that they inevitably "suck in" an amazing amount of air at the last moment before they are filled into the bag. Because of this, they behave virtually as a liquid during filling and have all the air in them when the package is sealed. Earlier, the entire surface of the old paper bags was porous, which automatically released all the air pretty slowly, making the packages solid and rock hard. Nowadays, waterproof plastic packaging has increasingly conquered this segment as well. The problem, however, is that the plastic film is not breathable. If the air trapped inside the package is not removed, artificially, somehow, the stacking will be very unstable. This is because in a static position, the powder settles in each package and the air separating from it forms an air cushion under the upper bag wall, which turns each package into a soft, unstable cushion.

When, on the other hand, the package is moved and transported, the enclosed powder and air are willingly mixed again, causing the contents to become liquid, which makes the stack unstable, despite the many layers of stretch film wrap. Various solutions have been developed for post-venting the sealed film bags, but there is always air left in the package. Plastic bag packages of fine powdery products are never rock hard, which is why they tend to behave "slippery", which is usually made even worse by fine dust deposited on the surface of the bags.

This is where the non-slip feature of the bags comes into play, with which the stack can be stabilised from the inside out. GripTop technology provides excellent stack stability for state-of-the-art fine-powder packaging. And Abrafol bags easily cope with even the most extreme challenges.

Do you find interest in our products?

Please let us know your interest by filling out the form below! You don’t have to think about drafting a formal enquiry letter, just fill in the fields below and we already know our job!